The ride that got everyone in trouble (but me)

I used to ride out near Sperryville, 211 and Page Valley often but lately I have spent most of my time in the mountains on the North side of 66. I always wanted to find a way over skyline from Tanner's Ridge or Redgate and rumor on the street was that route was through Big Meadows but it seemed like there was a fire road that paralleled the Old Rag hiking trail and I was determined to find it. The picture below was from my ride North of Harper's Ferry but it seemed to be the theme of my New Years Eve Ride. 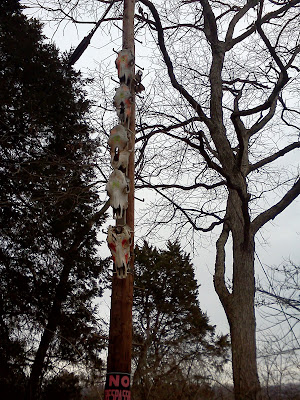 The route I chose started in Etlan off of Fort Valley Road. We simply would go along it, cut off on some back roads go up and over 211 out of Sperryville, up Red Gate, down Old Rag and end up back at the cars. Simple route, little over 50 miles and it should have been well under the 3 and a half hours Eli and Jeremy told their significant others we would be back so they could celebrate new years. 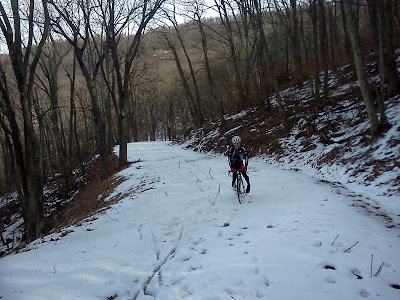 Unfortunately I failed to account for over 7000 feet of climbing, snow and ice covered passes (up to two feet in spots) and golf ball sized gravel. Oops. 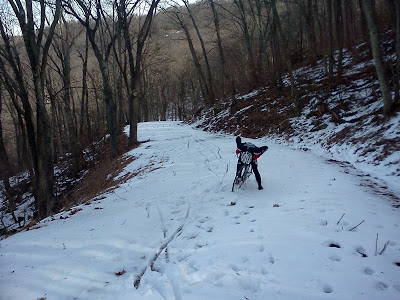 Climbing Red Gate in the summer is hard. Climbing Redgate with snow is harder, but it was very challenging and fun. At one point I thought Eli had turned around but he was going steady turtle and made it to the top first. 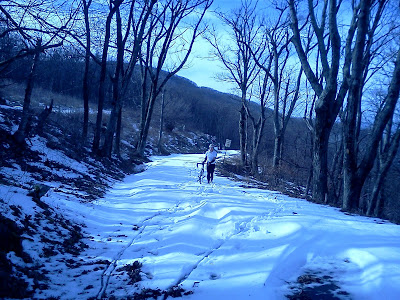 Jeremy on the other hand was probably one of the strongest of us but was defeated by a snow packed cleat and did the walk of shame in the last few hundred meters before the top at Skyline.

I am still learning how to do video (like not having the camera sideways).

When we got to the top those two were already late and in trouble. I thought the adventure would begin when we explored our way back on old rag but it really began climbing Red Gate. As we looked for the fire road off of Skyline I could feel the irritated energy from the guys and Eli kept asking if we knew where we were going (or something like that). I did, but as we rolled up and down the rollers on Skyline that turn off couldn't come soon enough. Finally we found it, and of course - it was snow and ice packed. Cool.

I have no pictures of our decent down Old Rag because it was white knuckled navigating and negotiating through the snow and ice. When there was not snow and ice it there was huge gravel. I thought it was fun, but Jeremy and Eli both called it interesting. I think if they were not two hours late by the time we got back to the cars they would have thought it was fun too.

We were supposed to ride again on New Year's Day but I got emails like this:
8:25 AM (7 hours ago)
Still in trouble over yesterday. Sorry man

I told one of them to blame it one me and he said "I can use that one only so many time".

Anyways, it was fun. My new rule though is to ride time limited rides on roads I know and do the exploring by myself or with people who don't have time restriction.