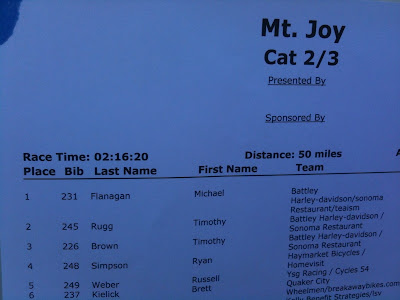 Race was 52 miles. 9 laps of a 5.8 mile course. Some good hills, not really climbs, but not rollers either. 60-90 second power climber kind of stuff, a few of them each lap.

Around 30 guys started. Probably similar deal at Walkersville--windy as all get out. I like the wind, so I was excited. The first mile is a false flat uphill and I was middle to the back of the pack, but I could see the pack was having trouble with the wind. It was just causing havoc.


Right around mile 1.5 we turned and had 1k into a horrible cross wind. I did sort of a stealth attack, seated, just really hard with lots of power. I got a good gap, then nailed it up the first power climb hill. Brown tried to bridge, but he wasn't making it without dragging someone. I kept the gas on for the next and biggest hill of the loop. I went up as fast as I can go uphill. Rugg launched. We linked up perfectly at the top of the hill.


We were off! We just drilled it for the next 5 miles or so. The next section was super fast. Net downhill and strong tailwind. I was rocking the 808s, and we were just flying through there. Sometimes spinning out the 53x11. When that would happen, the other guy would pull through.


Lap 2, the gap was 60 seconds, and we were only within sight in a few sections. The goal was out of sight out of mind.


I was starting to feel some little tweaks and twinges with 5 laps to go. Not exactly ideal. Rugg was phenomenal. The kid is a monster right now. On laps 4-8 he was actually giving me strong pushes up the hill. We're not exactly ideal break partners, since he climbs better, but we were getting around the course faster this way...haha.


They kept telling us 2:00, but apparently it was up to 3 or 3:30. We decided for me to cross the line in first just cause I needed more points than Rugg did.


Brown can update the race from his vantage, but he did a phenomenal job shutting everything down. The field was just demoralized that he was all over everything. He said the chase was really on for about 15 minutes at the beginning from a select group of guys, but they never made a dent. Apparently when we got 1:30 and were out of sight, guys in the group said, "They're gone! We're racing for 3rd." He ended up in a small chase group of 5 guys. They finished 3:00 back.


When Rugg and I crossed, we went straight back to the start finish to see Brown seal the deal. We knew he would do it, but it was so friggin' awesome to see it happen. Just surreal. The S/F was just past a little overpass. We saw the car, then Brown. He was still 150 meters out, but he showed everyone wheels. Rugg and I were cheering our lungs out, and seeing Brown dominate and seal the 1-2-3 for Harley eased the pain of the 50 mile breakaway. He beat Ryan Simpson from Haymarket by a good 3-4 bike lengths.


Oh yeah, with like 2k to go I got a very slow leak. Probably was down to 40 psi at the line, but it wasn't a concern. We had neutral support and time to change anyway, if I needed.


It was great teamwork, and an awesome team effort. We're all working on getting points, so we can race with the big fish in the big pond soon enough. We drove up in one car, raced as one unit, and raced hard...the way Harley rolls.
at 7:51 PM