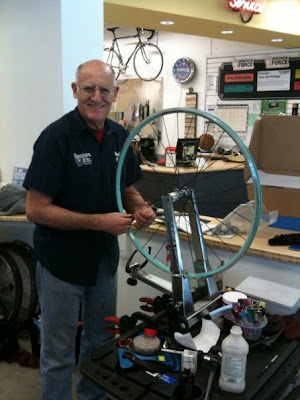 A few years ago I bought a set of Zip Team CSC wheels. They looked cool, were light and the first 20 feet I rode on them before a spoke broke was wonderful. I replaced the spoke, but every other ride I did on them a spoke would break. Everyone I know who had them said the same thing, and one guy even sold them on EBAY only to have them sent back. My cool wheel set became a house for spiders in my garage.

I kept hearing about some magical-wheel building-mad scientist dude who worked at Spokes, ETC who could rediscabumalete (my word) my wheel set. His name Bill Mould, a retired military guy with a web site http://www.billmouldwheels.com/shop.html about building wheels. I dropped my wheels off to Bill and picked them up two days later.

Seriously, I get nothing out of this, no sponsorship or anything - but today when my bottom bracket was creaking, my derailleur not shifting and all kinds of other funky stuff I realized my wheels are still perfect. I have been riding 250 - 500 miles per week on these for five months and have not had to true them once. I commute to and from work in the dark and hit about every pot hole and bit of debris in the road. I even flipped a few weeks ago and watch my bike bounce for an eternity - and despite the need for a new tire, bar tape, a right shifter, a left pedal and handlebars, I still had perfect wheels.
I can't remember who first told about Bill, but who ever it was, thanks.
at 4:48 PM