Honestly, the field here at Fitchburg is the strongest I have seen in years. If your a good US rider and your not starting the Tour tomorrow, your probably here. It is a NRC race.
Today's race was a 70+ mile circuit race. The distance does not phase me, but this nasty little hill we have to climb 24 times did. About three hours before the race, the weather forecast called for thunder, lightning and hail. Great. Russ warned me that the hard part of the race was not the hill, but the section after the hill - which proved to be true.

By the time the race started, the weather report had changed. Thank God, though it did start raining about half way through. The first three laps were hella fast, and I heard guys were getting dropped immediately. That was good because we had over 170 starters. Groups would get away, and groups would come back and it was steadily super fast.

Then it started to rain. Guys were sliding out, overlapping wheels and tearing out spokes. One good thing was we were going easy through turns, but the accordion affect was creating an insane sprint down the straight aways. I am sure tail gunners did not last long. At this point, I was focusing on staying up right.
Before the rain, a group got away on the flat after the climb where we sprinted for points. The 6 of them stayed away, and got close to two minutes on us, but Bissel brought it down to 15 seconds by the time we crossed the line to protect Zirbel's lead.
At about 12 to go, we were waved to one side of a traffic median we normally split for. There was an ambulance and people all around someone. I did not know it then, but it was Keck. He is fine, but he did have to go to the ER to find out if he had carbon fiber in his arm from his frame. 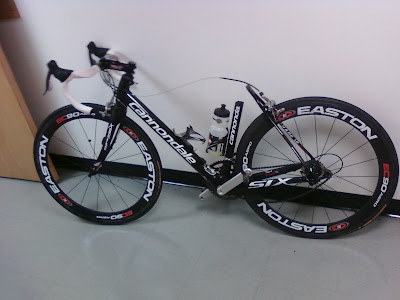 I did not get a picture of his seat or top tube because he took that with him to show the x ray people what the were looking for. There is a word for what we found out. Serendipity I think, but his wife Jen, in the same hour he crashed, crashed her car! She sent this picture 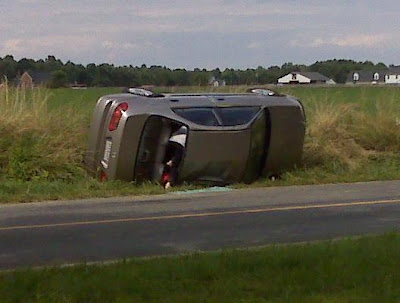 Now, what are the chances of that happening! She is all right, but the car is totaled. At least they got all of that out of the way at once.

Oh yeah, I heard I got top 15 today, but I don't know yet for sure. I had tunnel vision sprinting up that hill. If I did, that will be one of my best results given the level of competition here.

Also, I finally got selected by the Military to do an event! I am going to Nationals with them. I am pretty excited because this is my first opportunity to represent the services as an athlete. When I first found out I was so happy I ran into my Commanding Officer's office and punched him in the arm with the intention of telling him the good news. He was on the phone talking all serious and kind of glared at me. I realized what I had just done and left immediately, but he never said anything of the event. Out.